Chances are, you like many other Filipinos have been wondering what the difference between the Philippine Sports Commission (PSC) and the Philippine Olympic Committee (POC) is—and why would we need to have two types of “sport authorities,” so to speak.

When an Athlete or Coach enters the National Pool, hardly any of these questions are answered as well.

A basic understanding of the local sports system, which coincidentally, is almost the same setup as in most countries, is essential before we begin to analyze or react to issues and decisions being made by our sport governing bodies. We need to be able to define the dynamics and the roles of the PSC and the POC, versus that of the National Sports Associations (NSAs).

In the same way that the International Sports Federations (IFs) are the international governing body for a particular sport or groups of related sports, so too are the NSAs at the national level. The NSAs who are members of the POC must be affiliated with IFs that are similarly recognized with the IOC.

The POC is financially independent and does not receive any subsidy from the government, though its member NSAs and National Pool receive financial assistance from the PSC by virtue of RA 6847.

Since the inception of RA 6847, the number of NSAs and athletes have more than doubled, from less than 200 athletes in about 20 NSAs, to an average of 800 or so athletes in more than 40 NSAs, even though the sports budget has remained virtually the same over the years.

The great majority of NSAs remain totally reliant and therefore constrained by the amount of support it receives.  In other developed countries like the U.S., their NSAs (otherwise known as National Governing Bodies) are responsible for generating their own funds and would receive indirect support from the government by way of facilities, token donations or incentives, especially during landmark sporting events.

The table below summarizes the points made earlier and illustrates areas of comparison between the PSC, POC and the NSAs:

So begs the question: “Why can’t we have just one sporting body?” The IOC in its Olympic Charter stated that, “The NOC [National Olympic Committees] must preserve their autonomy and resist all pressures of any kind, including but not limited to political, legal, religious or economic pressures which may prevent them from complying with the Olympic Charter.”

FIFA President Joseph S. Blatter explains, “the autonomy of sport is essential in order to preserve the integrity of all competitions and the values of solidarity and democracy within the sporting world.  We must avoid the interference of external influences which often have interests other than the purely sporting ones, whether economic, political or countless others”.

However, he counters, “But we must also note that this autonomy brings with it the obligation for good governance by the sporting authorities, promoting transparency and open-mindedness. In order to find the best solutions, we need dialogue and cooperation with all the parties involved, especially with governmental authorities, always respecting the mutual competences of each entity.”

In the famous words of Uncle Ben in Spiderman, “With great power, comes great responsibility.” This should apply to sports as well. 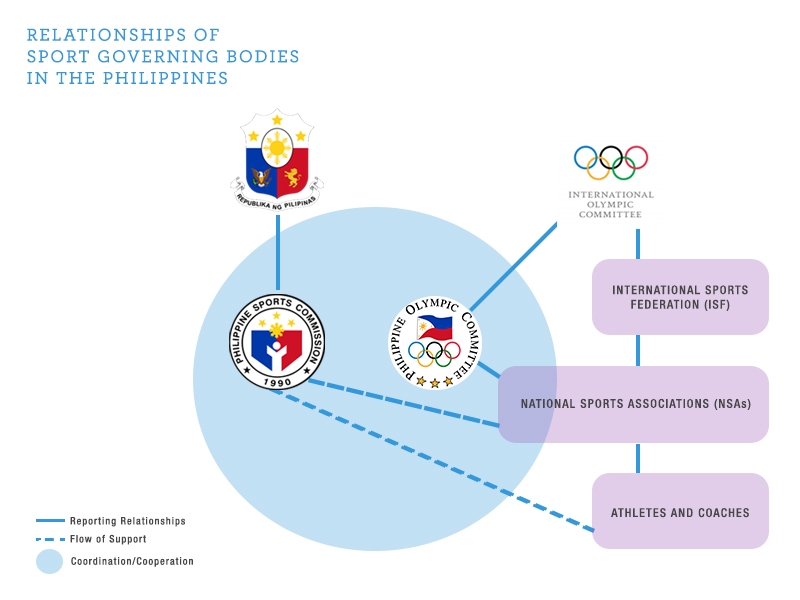 Above shows the reporting relationships of the sport stakeholders and sport governing bodies. As displayed, there seems to be no superior relationship of POC over the PSC or vice versa, but rather a cooperative one, together with the NSAs.

Many an incident in the past highlights the authority of the IFs, irrespective of the NOC’s mandate—as in the case of the International Basketball Federation (FIBA), when it suspended the Philippines from all basketball tournaments, because it still recognized the former NSA even as POC recognized the newly formed Philippine Basketball Federation Inc.  Sadly, it’s the athletes who always suffer. I can remember the plaintive words of then basketball player Charmaine Salalila, who after learning of a basketball-less SEA Games in 2005, bewailed “We’re just athletes and we want to play.”

In An Attempt to Solve: Tripartrite Sports Agreement

In an attempt to delineate the functions of each sport governing body, in 1993, representatives drafted a laudable “PSC-POC-NSA Tripartite Sports Agreement.”  It also further describes the need for autonomy. In one of the 34 passages: “That in consonance with the expressed autonomy of the NSA, the PSC exercises only supervisorial and visitorial powers over it for the purpose of checking if the financial aid extended to it is spent properly.”

The Tripartite Agreement provisions that embody the ideals accountability, governance and mutual respect of each entity’s roles in sport development still apply today. Unfortunately, said agreement was never heard of or honored again.

Even athletes and coaches’ rights, welfare, and participation have been dealt upon in this Agreement. To wit:

#25 – That any athlete or coach in the national pool shall not be subjected to summary dismissal and that 15 days prior to termination of his/her service, he/she shall be properly notified in accordance with due process through and arbitration committee created for the purpose.

#26 – That the PSC-POC and NSAs first consult athletes and coaches and their duly-authorized representatives before drawing up their programs and finalizing their calendar of activities.

Now and then, this concept of Sport Autonomy is being abused and brandished whenever convenient. And more so to be used as a blanket authority against Athletes and Coaches if they so much disagree or ask for what is rightly theirs in the first place.

More to be discussed in Part 2.